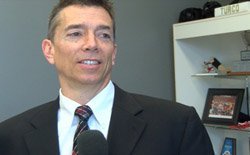 The Wichita Falls Wildcats began a new era on Tuesday, announcing John LaFontaine as the fifth head coach in franchise history at a press conference in front of local media, fellow staff and fans.

LaFontaine, who recently led the Shattuck St. Mary’s School (Minn.) Bantam (14U) team to a national championship, brings with him a wealth of experience at all levels of hockey, and an established track record of player advancement.“I am excited to be back coaching at the junior level,” LaFontaine said. “Developing players and helping them move on to college is something I am passionate about. I am also looking forward to working in Texas, and continuing the work the Wildcats have done in growing the sport in the community.”“John’s experience and success at every level he has coached at, including the NAHL, makes him the ideal choice to be our next head coach,” said Paul Baxter, team president and general manager. “His ability to be a tremendous leader in every situation was a big factor in our decision, and his track record speaks for itself in terms of player advancement.”LaFontaine is no stranger to junior hockey, having spent seven seasons at the helm of the Bozeman Icedogs from 2000 to 2007. While there, he coached multiple championship teams, leading the Icedogs to the America West Hockey League championship in 2001-02, as well as a North American Hockey League regular-season title during the 2005-06 campaign. Bozeman notched 48 victories that year, tied for the most wins in a single season since the AWHL-NAHL merger prior to the 2003-04 campaign. Furthermore, LaFontaine twice earned Coach of the Year honors during his stint in Bozeman, receiving the award in 2000-01 (AWHL) and 2005-06 (NAHL).The LaFontaine name is one of the most recognized names associated with USA hockey. John’s brother Pat was the third overall pick in the 1983 draft, selected by the New York Islanders. Pat went on to play 15 seasons in the NHL and was inducted into the Hall of Fame in 2003.      Throughout his career, John LaFontaine has consistently helped players advance to the next level in their careers, with 95 current or former players earning Division I commitments since 2000. Additionally, many former charges were either drafted or signed by National Hockey League teams, including Nathan MacKinnon of the Colorado Avalanche, and United States Olympian and current-St. Louis Blues goaltender Ryan Miller.“John brings a mindset that the younger kids can relate to, and I think that is very important,” said Wildcats ownership partner Roy Davoult. “He knows how to get the best out of the younger generation, and I think that will be a big benefit in both recruiting and coaching.”“I am excited to have John join our family,” co-owner Alex Shnayderman agreed. “We feel this is the next step toward bringing a championship to Wichita Falls.”LaFontaine becomes the fifth head coach in Wildcats history, joining Baxter (2011-14), Mark LeRose (2010-11), John Bowkus (2007-10) and Brian Meisner (2004-07). That number does not include Mike Flanagan, who served as interim head coach for 20 games during the 2010-11 season.In addition to announcing LaFontaine as head coach, the Wildcats have also added Mike Perkins and former head coach John Bowkus to the scouting staff.Season tickets for the 2014-15 season are now on sale. Call the Wildcats office at (940) 716-5587 to purchase your seats today, or visit www.wfwildcatshockey.com for more information. Stay updated on the latest team news throughout the year by connecting with the Wildcats on Facebook (WFWildcats), Twitter (@WFWildcats) and YouTube (Wichita Falls Wildcats).