Our Roadie for a Day’s Behind the Scenes Experience! 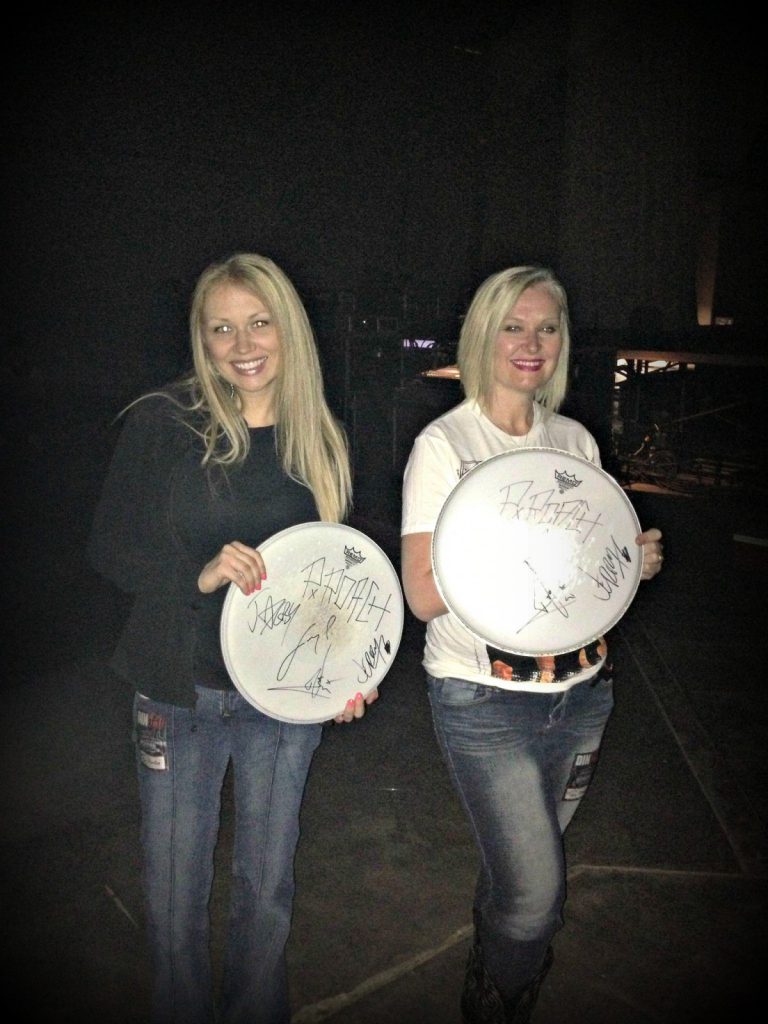 So my Roadie for a Day adventure started at 9:00 AM. I met with Samantha, my friend, in the parking lot and we went into Kay Yeager Coliseum with the help of Valleri.  Valleri introduced us to DIN productions, and we were caught up on what they were doing. Of course, we were immediately picked on because they started at 6:00 AM! But we said… ¨Hey! We were told to be here at 8:50.¨! Band members started mulling around about 10:30 AM and we immediately saw a lot of familiar faces. Jacoby Shaddix, lead singer of Papa Roach, walked right by me while I was talking to someone else and I almost didn´t recognize him. I´m guessing when you´re used to seeing the stage version of a performer, the regular, kicked back version is easy to miss if you´re not looking!

We ate lunch while talking to V (bass player for Otherwise) who was a real cool guy, and I got to chat a bit with the members of Papa Roach. Jacoby asked me if I was working hard and I told them, ¨Yeah, I´m working my tail off.¨, all while I was sitting in a chair with a bottle of water.

Our afternoon was spent checking lights and sound levels with the technicians, which was really neat.  Later, I took members of Escape the Fate to a local gym and they were pretty cool to chat with along the way.  Finally, by late afternoon we got our official stickers that said we were legal to hang backstage. Ha!

We attended a meet and greet for Papa Roach at 5:00 PM. Of course, we had been talking to them throughout the day so it was kind of a running joke,¨Hey, didn´t I just see you?¨ We took quick band pictures and we were told to go backstage for dinner. Dinner was pretty good. We ate at the table opposite Papa Roach. Some of the other bands waited until their set was over to eat dinner.

The first band of the evening was Hell or Highwater. Great band. Samantha and I rocked out next to the corner of the stage by the barricades. One of the guys had really cool plugs in his ears that I had to look at closer while he was standing around afterwards, as they were white roses. Super nice guys and I hope they come back to Wichita Falls!

Second band was Otherwise and they were awesome! I loved listening to them play. The bass player was a beast! Great vocals and great music all around. The guitar player and lead singer are brothers, which I didn´t know before so that was pretty cool. We got to know V during the course of the day and he was pretty awesome. I wish those guys many years of success which I have no doubt in my mind that they will. I look forward to having them back again.

Third band was Escape the Fate. Samantha went around front to watch them and rock out while I stood in a corner to watch. I admit in my watching I completely forgot to take pictures. They were cool when I was driving them around earlier and I learned a bit more about them. Fourth band was In This Moment. Loved the theatrics. She reminded me of a much harder Lady Gaga, with more style and class. Her voice is huge. I´m sorry I didn´t get to tell her how much I enjoyed her set, but she had her son with her so she wasn´t out much that day. Her costume changes were amazing and very effective. Fifth band was Papa Roach. WOW! The energy during their performance was insane! I found myself head banging (rubbing my head this morning as I am writing this). Their set was awesome. My favorite of the night by far! AND the best part? They are the single nicest guys around. Really cool!  I got to tell them when they were leaving the stage that it was awesome and I spent the day with random chatter at one or all of them which was the highlight of my day. I really hope they come back… if not for the music, which was awesome, but to give them a hard time again!

Sixth Band was Stone Sour.  We talked to Johny and Roy (bass player and drummer) several times throughout the day and night and both guys were really great. Both are so awesome live and I got caught up in the bass groove and the drums during their set!  One of Johny´s bass guitars had lighted frets!

After it was all over we were presented with drum heads signed by all the members of Papa Roach! They did NOT have to do this for us and it was appreciated more than I can ever say. We caught a few people on the way out and said our goodbyes, thank yous, and safe travel wishes to the people we had spent the day with.

All in all it was an amazing experience and day. I got to see some of the most sophisticated lighting setups and learn how the boards work!

THANK YOU again for giving me the lighting set up for Stone Sour. That was awesome!

I learned so much and I really came to like a lot of these guys not only for their music contributions, which are great and many, but also to get to know them and their personalities. It is something I know I will not soon forget.  Thank you to the Wichita Falls MPEC and the City of Wichita Falls for all you guys do to bring bands like this here. It was truly an unforgettable experience!

For everyone reading. Pick up the CD´s for all these bands. Well worth the listen if you like rock music!