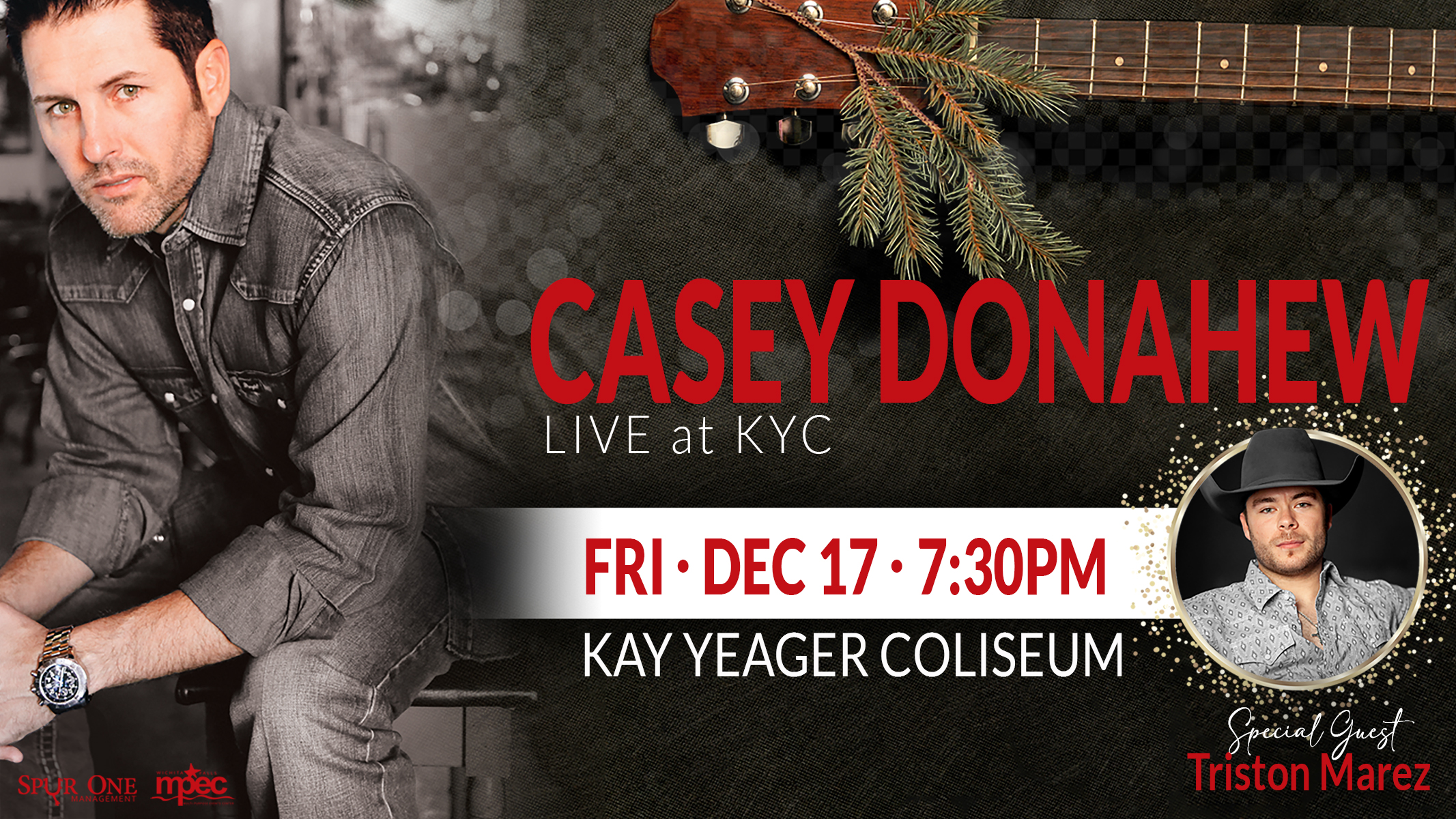 We are excited to announce that Casey Donahew will be performing LIVE at the Kay Yeager Coliseum December 17, 2021 with special guest Triston Marez! Tickets go on sale Friday, November 12th.

Over the last 18 years, Casey Donahew has risen from a favorite on the local Texas music scene, racking up 21 #1 singles, to a nationally hot touring act who consistently sells out venues all across the country.

Donahew has released eight independent albums to critical and commercial acclaim. Donahew’s STANDOFF, quickly topped the iTunes Country Chart at #1, upon its release, and his follow-up album ALL NIGHT PARTY, out on August 19, 2016, immediately rocketed to #3 on the Billboard Top Country Albums Chart, #13 on the Top Album Sales Chart and Top Current Album Sales Chart and #40 on the Billboard 200 Chart. The project also took the #2 spot on the Internet Albums Chart and landed at #3 on the Independent Albums Chart. His 15th anniversary record titled 15 YEARS, THE WILD RIDE, a collection of Donahew’s most popular songs, and the ones that droves of fans sing night after night at his live concerts, was inspired by and became a gift for those fans who remain loyal in Donahew’s standing-room-only audiences.  His current album ONE LIGHT TOWN, garnered Donahew his latest #1 single, “Let’s Make A Love Song, which was the #1 most played independent song on country radio for 2019 and had BILLBOARD spouting upon its release “…’Let’s Make A Love Song’ has radio written all over it”.

Country singer Triston Marez’s sound isn’t just centered around the crying steel or prominent fiddles that often go hand in hand with the rolling plains or legendary dancehalls that come to mind when thinking about country music — they’re part of a way of life for the 24-year-old. Marez’s debut EP, That Was All Me, set to release Jan. 25, showcases Marez’s rich vocals telling tales of long nights, former flames and new love with a relatable honesty.

On the EP, Marez’s influences — Chris LeDoux, Aaron Watson and Cody Johnson — weave throughout a collection of pure country music. In the EP’s title track, “That Was All Me,” a raucous night can be blamed on the jukebox, neons buzzing and one too many whiskeys, but insists any feelings felt were true. “Where Rivers Are Red, Cowboys Are Blue” hearkens back to the heyday of cowboy songs with an ode to a former flame, while “Dizzy” features the other side of the coin and a fledgling love story found on the dancehall floor. “Reservations For Two” is a romantic night set in the great outdoors, and “Here’s To The Weekend” offers an appreciation for a few cold beers with good friends while searching for a reprieve from the daily grind.

A Houston native, Marez’s sound isn’t just centered around country music, it’s weaved through his entire 24 years. As a member of a musical family from Oklahoma known for their bluegrass and fiddle talents, Marez started playing guitar at age six and his first live performance was a Buck Owens song in the first grade talent show. Marez worked as a ranch hand and even rode bulls as a hobby for years to support his music career. He also won the Houston Livestock Show & Rodeo’s talent competition in 2014.