Arena football is coming back to Wichita Falls! 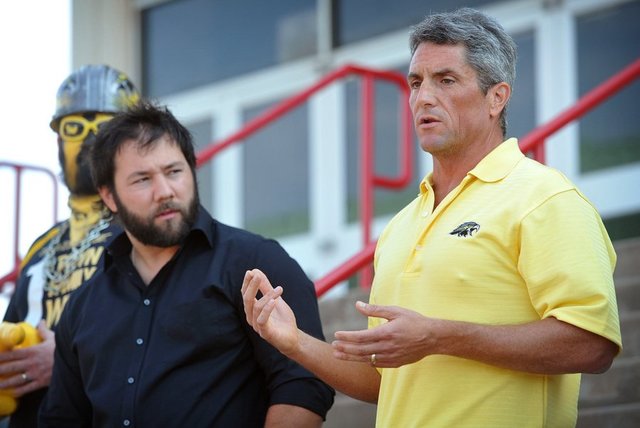 Local businessman Drew Carnes was announced as the new owner of the Wichita Falls Nighthawks at a news conference on the steps in front of Kay Yeager Coliseum on Thursday. Carnes and his wife Teri purchased the franchise from former owners Jerry and Michelle Hughes with the intent of turning the Nighthawks into an indoor football team.

Hughes founded the Nighthawks in 2012 along with business partner Steve Stamper. After suffering severe financial losses in the team’s first season, which concluded with an undefeated record and minor professional football national championship, Stamper decided to move on from the endeavor, but Hughes and his wife decided to attempt pushing the franchise through another season.

The financial loss became too great for Hughes and the franchise folded July 18. Less than a month later, the Nighthawks have been given a new life.

“Nighthawks Nation has been through a lot the last couple year,” Hughes said. “A lot of highs, a few lows, but you know the one thing we always stood for was character and trying to do things right and be a beacon for our city. That’s definitely something that’s about to continue.”

Carnes said it was the Nighthawks’ involvement in the community that made him want to keep the franchise alive.

Carnes said he sat down with Hughes shortly after the Nighthawks canceled the remainder of their season and began brainstorming for a way to resurrect the franchise. An indoor football product only made sense after the recent upgrades the city had purchased for Kay Yeager Coliseum, including new artificial turf and an upgraded scoreboard.

Carnes offered Hughes a position within the franchise, but Hughes declined.

“My wife and I felt God was leading us to take on the Nighthawks for another season and we’re glad we did that because as tough as it was this wouldn’t be happening if we hadn’t have done that,” Hughes said. “They offered us a position, but we felt God leading us in a different direction so we’re stepping away.”

Carnes said negotiations with the city to procure Kay Yeager as the new home for the Nighthawks are ongoing, but he’s positive a deal will be struck.

The Nighthawks are yet to be affiliated with an indoor football league as well. Carnes says he has explored joining the Lone Star Football League and the Indoor Football League. He said he has reservations about the stability of the predominantly Texas-based LSFL as it is attempting to merge with the Champions Professional Indoor Football League, which is based in the Midwest. The IFL is a 10-team league with franchises based in 10 different states, including the Texas Revolution in Plano. Play

“There are some concerns I have with (the LSFL) so I’ve branched even further out to the IFL,” Carnes said. “(The IFL) seems to be recognized as more of the premiere league in indoor football (after the Arena Football League). We are going to bring the best league to Wichita Falls that this market will support.”

Providing a quality product on the field is one of the priorities for Carnes, who stated he is willing to spend the money needed to attract high-caliber players.

Carnes plans to only play the role of owner with the Nighthawks. He says he is already eyeing potential coaches and whoever he chooses for the position will have the main say in regards to player personnel. Carnes said any of the former Nighthawks who are interested in playing for the team will be given a chance to at least try out.

“We will reach out to any of the former Nighthawks players. We will have open tryouts probably sometime in either late September or early October and will probably have another open tryout in January. Our training camp for either league will probably start sometime in February,” Carnes said. “I’m not going to be making any of the player decisions. I’m going to be hiring a coach and the coach is going to handle the entire player operation. Obviously I would love to have as many Nighthawks back as possible, but I’m not going to put any pressure on the coach as far as who to bring back.”

Carnes claims as much as 80 percent of the available seats will be sold for $10, although seats near the field will obviously be sold for more. Season tickets will also be available.

The Nighthawks are the first arena team in Wichita Falls since 2004. The Wichita Falls Thunder played less than one season at Kay Yeager Coliseum, finishing 1-8 and losing their last eight games before folding for financial reasons with five games left on their schedule. Carnes is well aware of the struggles professional sports teams have had surviving in Wichita Falls, but believes he has the formula to make it succeed this time around.